Do we need another RPG blog??

No we don't, but sometimes I have RPG ideas that don't fit in whatever campaign I'm running at the time and don't justify a standalone itch.io project.  I rejoined the hell-scape that is twitter and I'm writing this right now.  I figured it would be a good outlet for the small ideas that can be covered in a few paragraphs as well as document my larger in-progress projects.

In the Shadow of the Wall 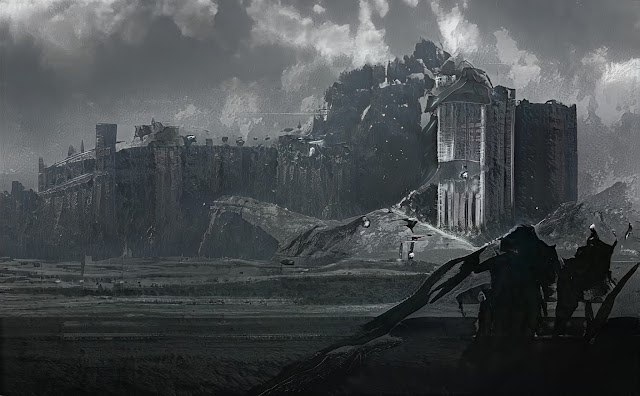 Right now the main project I'm trying to get finished is called In the Shadow of the Wall.  It is inspired by the wall around the city of Nessus in Gene Wolfe's Book of the New Sun as well as the mega-structure from Tsutomu Nihei's manga BLAME!  The project will be a system-agnostic science-fantasy location and toolkit.  Basically lists of details and NPCs to drop into your game.

The idea is that there's a mysterious black cube embedded into the countryside.  The cube is the size of a small nation, and so large that most of the people who live in its shadow believe it to be some sort of wall.  It'll include NPC's traveling to the cube and the strange artifacts you might encounter on your approach.  There will be details of the hanging cities that have been built on the sides of the cube and 100 NPCs who live there (that's taking the bulk of the time).  I want to include tunnels that have been dug underneath so there can be some dungeons.  There will also be a section about what is on top of the cube in case anyone tries to climb over the "wall" and a section describing possibilities of what is inside.

There isn't any kind of proscribed adventure plot just lists of NPCs, items, and complications.  This way it will be as flexible as possible: it can be run as a giant cube, an ancient wall, or just details to be stripped for some other science-fantasy setting.

If you fancy yourself a skilled archeologist and want to attempt deciphering the dead language that is my handwriting, here is the scan of my initial notes.  I am currently in the process of translating them into English and complete sentences.  Once I have a text-only version I'll probably post it here before moving on to the layout of the final project.

In 2021 I wrote a game called Flying Fortress for a One-Page RPG game jam.  It's a hack of Into the Odd by Chris McDowall about airships and sky pirates.  It was heavily inspired by Talespin, Studio Gibli, and Bioshock.  I wrote it as a tri-fold pamphlet, one piece of paper front and back.  Fitting a whole game on so little space was a fun challenge but I want to expand it into a full zine (around 30 pages of half-letter or A5 size).

The pamphlet will still be compatible with the full game, but I want to expand the number of character backgrounds, add a section of GM advice and procedure to prep the world and game sessions, and go ahead the add some starting locations.  I'll probably go ahead and publish the updates as I add each section instead of waiting until the whole project is done.  I am still on the fence about whether I want to use Into the Odd's new SRD or start with the rule wording from Cairn and be able to publish Flying Fortress under a Creative Commons license.

As of October 2022, the one-page version is at almost 800 downloads; I never expected to break 100 so I'm over the moon that people seem to be resonating with it!  I'm excited to get a more substantial version out there as soon as I get In the Shadow of the Wall off of my plate.