I have a couple other RPG projects I'm tying to get finished, but this is an idea that's been kicking around inside my head and I wanted to get it out.  I've been thinking about a wild west RPG that uses a hand of blackjack for character creation. 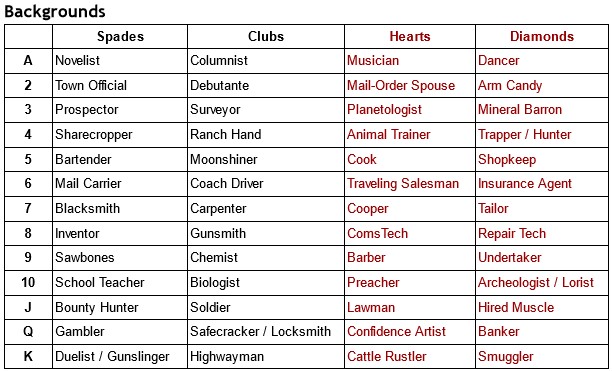 Dealing the Cards
The GM deals one card to each player face up, determining their Current Profession.  Then deal a second card face-down which determines their Hidden Past.

Optional Third Card
If any of the players are unhappy with their cards, they may be dealt a third card face down.  Amongst the three cards, they must end up with one Current Profession face up, one Hidden Past face down, and the extra is discarded.

Choosing Backgrounds
If you have a specific party makeup in mind or a focused campaign theme, then you can choose your backgrounds.  Deal two face-down cards to each player.  They select one to be their Hidden Past, and choose their Current Profession from the complete background list.

Current Profession
A player character’s fresh start, how they present themselves to the world.

Hidden Past
The past each character is running from.  It may be criminal, tragic, or just embarrassing.

What Happened?
Start thinking about what happened to your characters for them to seek out a fresh start.

Alias
If a character’s background is criminal in nature, the player may create an Alias.  Maybe just a profession or maybe a whole new identity.  The Alias does not incur any mechanical benefits.

I'm much more into space westerns like Trigun and Firefly than actual "old west" westerns and America's westward expansion isn't without its problems, so this game will be about folks settling a recently terraformed planet.

I like the skill tree from Mothership and will probably incorporate something similar for character advancement.  Each of the backgrounds from character creation will have a couple starting skills to choose from, an area of expertise, and equipment.

I'll probably go with 2d6 dice for the main resolution mechanic.  Not only is 2d6 a tried and tested with a predictable bell curve, it emulates craps, continuing the gambling theme.

I haven't figured out the details, but I like the idea of using a hand of poker to resolve montages and long distance travel.

And finally, instead of HP characters will have something like Grit which will be represented by poker chips.  Each character will have a Starting Grit on their character sheet, and get that many chips at the beginning of each session.  They will be gained and lost throughout the session and at the end any excess chips can be spent advancing their characters through the skill tree.